Augh. Daily Post is killing me with their prompt choices. I am supposed to talk about the sisig carbonara I made over the weekend today but tomorrow, as has been requested many many times by a dear reader, follower, and fellow pinoy blogger, I will be talking about at least one of my many situational playlists, the one I listen to while cooking/eating. So clearly, ‘sound‘ would just have been so perfect for that but I just…I just can’t stray from the path. It hurts too much. Hahah. I have to follow schedules. SO…playlist tomorrow, and let’s all just hope and pray tomorrow’s prompt is as fortuitously relevant. And instead today…we talk about… 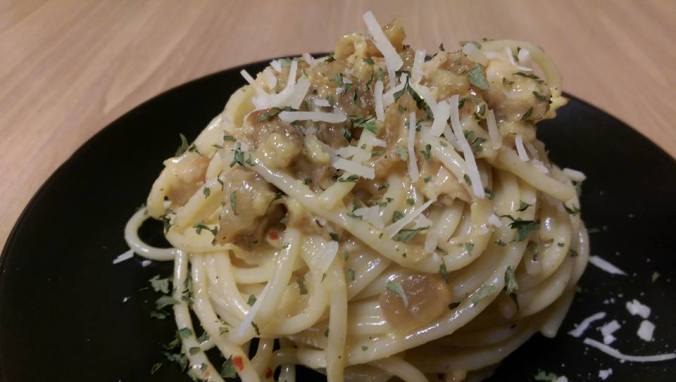 Carbonara is an Italian pasta dish that originated in Rome. It is a very simple yet filling and rich dish. Pork (the tender jowl or guanciale is preferred but pancetta can be used and most

home cooks without access to their own authentic Italian salumeria use cured bacon) is cooked and most of the fat rendered before adding pasta (traditionally spaghetti) and then tossing it all together with a mixture of eggs, cheese, and plenty of freshly ground black pepper. Speed in tossing the pasta and being sure to do it with the heat off is essential to prevent the eggs from curdling and fully cooking. The residual heat of the pan, pork, and pasta will slowly cook the eggs and create a creamy, runny sauce that is most notable for the lack of actual cream. The first time I ever tried this pasta was at the Grand Lux Cafe in a mall near my town. It was very good but unfortunately not the most authentic version ever. It had the addition of peas (which are one of my least favorite vegetables), garlic, and was a full on cream sauce. Forgive me, I didn’t know any better. I loved it so much that I had to go home and research the pasta to make it for myself. That’s when I first learned that authentic carbonara has no cream and ever since I’ve made it the traditional way and have never looked back. With just a few easy and relatively cheap ingredients (pasta, bacon, eggs, cheese, and pepper) you too can make this simple dish at home for a weekday dinner and you’d be surprised by how quickly it’s done and how quickly you’ll want to finish it too. I use freshly grated parmigiano-reggiano and whole eggs but some recipes might switch out for pecorino romano or just egg yolks. This really just depends on how rich you want the sauce to be and if you prefer the saltiness of pecorino or the nuttiness of parmigiano. I think Antonio Carluccio’s video recipe is one of the best and most authentic representations of how to prepare this dish.

Sisig on the other hand, is also one of my all-time favorite foods but I don’t necessarily recommend you try making this any time soon. Hahah. It is time-consuming, tedious, complicated, but yes with very great payout. But since it is such a quintessential Filipino dish, any good Filipino restaurant will have their own version of it on the menu for you to enjoy. Like most Filipino dishes, sisig is extremely regional and therefore subject to plenty of variations. It is traditionally a dish from the Pampanga region of the Philippines and is

made usually using parts of the pig’s head (the ears, the jowls, and the snout). First they are boiled to tenderize, then chopped into tiny pieces, and the bits are broiled or fried before being served super crispy on a sizzling platter. The pork is flavored with soy sauce, vinegar, onions, and plenty of spicy peppers. The last time I was in the Philippines I got to try a lot of different variations of sisig, including ones made from chicken, squid, and even tuna. The tuna was perhaps one of the best versions I’ve ever had. I prefer my sisig super crispy and spicy, but as I’ve said, sometimes you will find milder versions and most often in the Philippines you will find that the dish is served with a raw egg that is then mixed into the dish or with mayo. The ears are great because it is just soft tender fatty meat and then crunchy cartilage in the center. Sometimes cuts of pork belly are also used for the fat and the skin which becomes incredibly crispy and crunchy. When it comes to introducing non-Filipinos to Filipino food, spicy sizzling sisig is right up there along with adobo and lumpia (our version of egg-rolls) as the best and most universally liked introductions.

So interestingly enough, carbonara has already made its way to the Philippines and is actually one of the most popular pasta dishes in the country. Food has its own legs and

often travels a lot faster than people realize. My aunt on my mother’s side makes this incredible version of Filipino carbonara that I think is just a perfect representation of the characteristics of Filipino palettes. Filipino carbonara first of all, actually uses no eggs at all. Like, at all. Instead it is a straight up super creamy sauce made with Nestle all-purpose cream (which is incredibly sweet), bacon, mushrooms, onions, and garlic. In this way it is actually much closer to an alfredo sauce but the very particular addition of Nestle cream gives it an overall sweetness whereas the traditional carbonara is usually characterized by its rich slight saltiness. This is common in a lot of Filipino dishes. We Filipinos just really like our sweet things. Like spaghetti in the Philippines. Ground beef, hot dogs, and a lot of sugar characterize our namesake ‘sweet spaghetti’. Whenever I visit I love that my aunt always makes sure that one night while I’m there she makes this sweet, rich, and creamy pasta.

But to truly make an east-west mashup, I wanted to use really crispy, spicy sisig and substitute it for the pork needed in authentic preparation of carbonara. If you think about it, sisig already displays much of the same characteristics of guanciale or pancetta. It is made from the same parts (the jowl) and the previously fried sisig has plenty of wonderful flavors and fat to render into the pasta. I use less black pepper because the sisig already has plenty of kick. In a separate pot of boiling salted water I start cooking the spaghetti and when it is almost close to being perfectly al dente I begin making the carbonara. Adding no oil whatsoever to a cold pan, I put the sisig and bring it up to temperature. This lets the sisig render some of its fat without searing and burning. You know it’s ready when it starts to sizzle and sing and the pieces start popping up and try flying out of the pan (think cooking bacon). Meanwhile in a bowl I’ve mixed four whole eggs, some freshly ground black pepper, and plenty (I mean plenty) of cheese. When the pasta is ready I drain it and toss it in the strainer to get as much moisture out as possible before adding it to the pan of sisig. Once it’s all thoroughly mixed up and I have a good amount of heat throughout the pasta, I turn off the heat and add the egg and cheese mixture. A few incredibly showy flicks of the wrist and tosses of the pan and it’s all mixed up and the egg has turned creamy and the cheese is melty and…oh my god. This thing was good. Added some extra cheese and parsley on the plate and voila, my version of sisig carbonara. 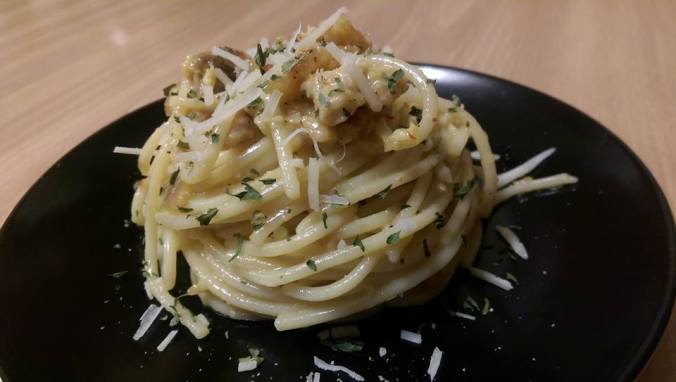 Oh yeah. I could definitely make (and EAT) this again.