On this historic and momentous occasion…

HA. That sure as hell sounded pretty full of myself, didn’t it?

I am pretty excited and downright thrilled though that I’ve made it to day 200. I am a little more than halfway through and the growth I have experienced as a writer, a person, and as a member of this blogging community, has been really inspiring. I’ve been having a lot of fun, still looking forward to every day’s opportunity to write and reflect, and even more so looking forward to the feedback of the readers. The well hasn’t even nearly begun to bottom out, and it feels like it continues to get deeper and that I am continuing to find more and more worth writing about. I even have some ideas of what I’d like to do post-MvL experiment phase.

But let me tell you something about fun…

I have been addicted to this game ever since I heard about it. And I was behind the ball here. A million people downloaded this game after it came out and that’s when I heard about it. A million downloads for a free-to-play game is a pretty big deal. Often times these games have limited exposure and budget. Not to mention that the free-to-play model (often shortened to ‘F2P’) is usually plagued with a flurry of micro-transactions and ‘pay to win’ gimmicks that end up making these games more expensive than big-budget studio releases. I decided to give it a try after such overwhelmingly positive and viral reactions. I am so glad I did, as this has easily become one of my most favorite games on PS4 so far.

Let us embark on on a journey of discover about the many wonders of the Tower of Barbs. The Tower of Barbs is located on the tiny 3.7 sq mi island of South Tokyo. Legend has it that this island was formed during the Earth-rage tectonic disturbance of 2026. The Tower stands at 1686 feet, the equivalent of a 30-story building with super high ceilings. Many say that the Tower is actually growing with each passing year. Legend has it that a great treasure lies at the top of the Tower. As such, many brave people often attempt to climb the Tower to obtain its riches. However, none have managed to survive the Tower’s horrific trials; and thus the Tower stands as a grim reminder of the many lives lost in search of this mythical treasure. I hope that you too will enjoy your climb of the Tower, and experience the many wonders that it has to offer.

Let It Die’s story is just the right balance of not giving too much information. It’s in the details that aren’t shared where the game takes on its air of mystery and intrigue. And, Let It Die is actually a game within a game. Now, stay with me on this. The game you play, ‘Let It Die’ is set in a world where you are a person inside an arcade playing ‘Tower of Barbs’. Trippy, right? But how cool is that! You’re a gamer, IN a game, PLAYING a game! The ‘real world’ extends only as far as the confines of this nameless mysterious ‘Arcade’ but it is just fleshed out enough to feel immersive. And within the ‘Tower of Barbs’ is a world of violence, survival, formidable bosses, ‘Haters’, ‘Hunters’, and endless exploration. You want to climb the Tower of Barbs. You want to know what is waiting for you at the top. And every time something new is unlocked for you, you’re excited.

Akira Yamaoka, who worked on Silent Hill, Shadows of the Damned, and the Silent Hill movie, is the man behind the music of Let It Die. It is honestly one of the best and most extensive game playlists I’ve seen. More than a hundred Japanese bands of different styles have been featured in the game offering endless options for in-game soundtrack. More so though, the ambient music sets just the right tone and environment during play. Your heart starts to speed up in rhythm to the fast, intense rock riffs when an enemy spots you and starts chasing. You can almost feel the vibrations in the large echo-chamber like rooms that you explore. The metal clanging in the distance, the ever-present guttural growls of enemies around the corner, the array of sounds and effects create an otherworldly experience.

From Meijin, the pro-gamer dispensing sage advice at different times during the game, to Kommodore Suzuki, the merchant/craftsman who builds and improves your in-game gear, the characters of Let It Die have powerful, effective, memorable personalities that make them fun to interact with. You will, over the course of the game, be interacting with every character, as they all serve important purposes. Naomi in the Arcade gives you extra quests to add new obstacles and offer

tempting rewards. Meijin will give relevant and often timely advice as you progress along the Tower. Both the Kommodore and the Mushroom Magistrate offer aid in the form of items and gear to help you gain an advantage along your journey.

Within the Tower are interesting and grotesque bosses with pure destructive power. If you’re lucky, you’ll also run into the ‘Moving Department Store’ that gives you the chance to buy ultra- 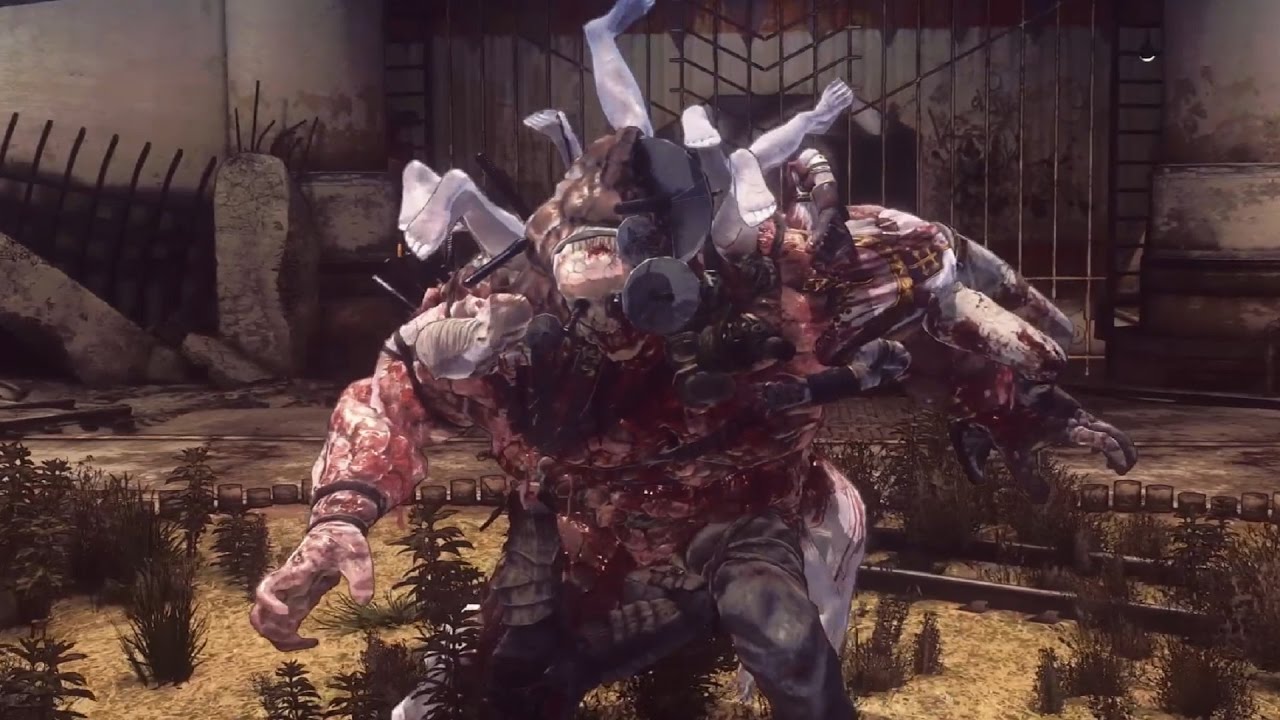 rare and valuable materials and blueprints but for a hefty price. I absolutely love how the game has created its characters. There is a style, like the indifferent bubblegum schoolgirl look of Naomi to the grotesque nature of the mid-boss Coen. There is personality, like Meijin’s hardcore gaming focus and the Mushroom Magistrate’s obsession with the power of ‘shrooms.

But none are more entertaining, more fascinating, and more immediately memorable and likeable, as the skateboard riding, sunglass wearing, accent-heavy Uncle Death, your number one fan.

Everything about this guy screams ‘cool’, man. The sunglasses, the skateboard, the accent, (Finnish, btw), the way he calls you ‘senpai’ (something like upper-classman in Japanese). He’s there offering you advice, sending you emails, and when you land a particularly gory attack, he pops up on your screen to congratulate you. No one wants to see you beat the game more than your sickle-wielding friend, and you better not disappoint!

Not going to lie, this game is not for the faint of heart. For gamers, it is best described as Resident Evil meets No More Heroes meets Dark Souls. For non-gamers, think of it as a survival horror. You are trying to climb to the top of a tower, not knowing what enemies and horrors await, with an exhausting and frantic combat system that relies on precision timing and fast reflexes. But more than anything else, this game is about death, violence, and devastation. Your most powerful moves are meant to kill enemies in one hit, so they are often comically violent. There is a playfulness to the madness, but one I think only a hardcore gamer would be able to appreciate. In a way, whenever I discover a new weapon on one of the floors, I am excited to see what crazy over the top violent things I can do with it against enemies. The combat is unforgiving and exact, but super-rewarding when you time it just right and are rewarded with a shower of blood and coins. It is difficult and sensitive enough that you never really feel like you have too much of an advantage, even if you are multiple levels higher and better armed than your opponents. Anything can change in the blink of an eye, and if you are reckless enough or unfortunate enough to draw a crowd, you’d better be prepared. Everything from the environment to the equipment you use (traffic cone helmets, pipe hammers, jackets made from rain ponchos) contributes to this idea of survival at any cost. And when you’re low on health being chased by a ‘Hater’ and you’re munching on the grilled body of a frog you found, you feel like ‘anything’ is exactly what you’ll need to do to survive.

I anticipate many sleepless nights with this game, and with the opportunity to continue to add more floors and further developments, I hope to be playing this game for a very long time. It’s slick, stylish, fun, and exciting. And if any of you happen to be climbing, if I happen to send some of my fighters to hunt you down, try not to take it personally. Hahah.

Oh and as a fun side note, I’ve been naming all my fighters after the bloggers I regularly interact with on here! So whether you play or not, chances are there is a version of you climbing up the Tower and slicing off heads!