This is one of those moments where I wish there was a faster and easier method of delivering my thoughts to you than typing. My mind races and my fingers stumble and there is only coherence and order and structure in the infinitesimally brief electric jolts of my brain. The whole of what I wish to say flashes in my mind at the speed of thought but disappears by the time I can think of the first letter to type.

And what praytell, you may ask, is causing such a frenzy of thought and inspiration that I

should want to share with you so immediately? It is this:

The conversation begins innocently enough. The ‘sandwich’ is something so intrinsic to our very existence. It is so common in our vocabulary that the assumption is that if we are asked to define what a sandwich is, it would be so easy to capture its essence.

You can use the dictionary if you’d like. It really would be not much more help. The dictionary is lazy and timid. It must remain neutral. So you receive the simplest and lowest common denominator of ‘sandwich-ness’. It is by no means a satisfying enough portrayal of what we think we know of sandwiches.

I propose to you the following items: the taco, the hot dog, the lobster roll, the Reuben, the grilled cheese, and the argument-inducingly named ‘open-faced sandwich’. 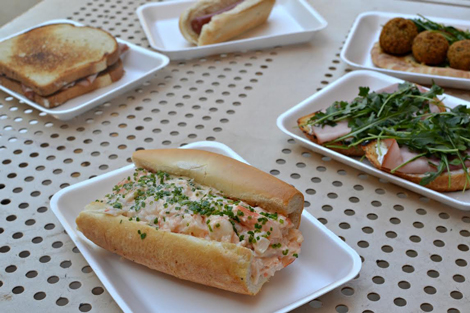 Are these all examples of sandwiches? Why or why not?

I assume many of you have considered at first thought that surely that which makes up a sandwich is ‘some filling encased in an edible container’. That would certainly allow for all six, yes? Now how do you feel about the hot dog or the lobster roll? Tempted to say it has to be two pieces? What about the open-faced sandwich. And what if the hot dog bun splits in half.

There are a lot of layers of understanding and interpretation behind this seemingly simple question.

There are matters of intent. Can you say the pitmaster who spends all day making pulled pork, which is then served on bread, was really just making sandwiches all day?

And what about of efficiency. If we have a more specific and particular name for something, we tend to use that over anything less specific. We call a hot dog a hot dog because it is more specific, though a hot dog could still be called a sandwich. We call benches benches and not chairs though they are certainly equivalent.

And what about of context. Certainly most of us would recognize a sandwich as usually being two pieces of bread. But in Scandinvaian countries they have open-faced sandwiches. Can we apply imperial rule to dictate that what they have created must be categorized as completely different entities?

Did you know that New York has a sandwich tax? As such in order to profit as much as possible the New York state legislature has legally broadened the definition of sandwiches to include burritos, gyros, wraps, and pitas? Certainly if it is of legal benefit or discredit, we are going to be more or less generous with our definition.

This is a fascinating conundrum. One that threatens many friendships and will certainly be a part of heated discussion tomorrow with my friends. I think ultimately though what this humorous and hopefully lighthearted conversation will convey is that…it is really impossible to know anything completely and absolutely objectively. We will always offer our own shades of meaning because we cannot know everything about what is without really discussing what isn’t. So a sandwich becomes difficult to define to capture all of its iterations without ending up discussing what a sandwich isn’t. And that’s why we disagree. It’s because we see the shadow of a sandwich from different angles and different light sources.

If we can’t agree on something as fundamentally simple as a sandwich, what about the real matters of life? Of justice, of truth, of morals and ethics. It becomes so…lost in translation. The best we can do is understand that definitions change based on perspective. And what do we do with that. Well we can’t keep at each other’s throats over hot dogs, that’s for sure. We’ve all seen and processed the shadows on the walls from our own vantage points.

Such then must be our understanding and expectation of relationships as well. Of love. We all know it intrinsically within ourselves what love should be and feel like. But we often times cannot agree on love without discussing what love isn’t, and thus we fight and fall out of love again because we are not the same.

My mind is exhausted and yet still racing. Sandwiches, who would have thought? Hahah. A lesson to be learned of love and expectations and definitions. A warning to be wary of context and application. What makes a sandwich to you?

2 thoughts on “Day 66 Supplemental: The Man and the Annoying Dinner Conversation; ‘Sandwich’”